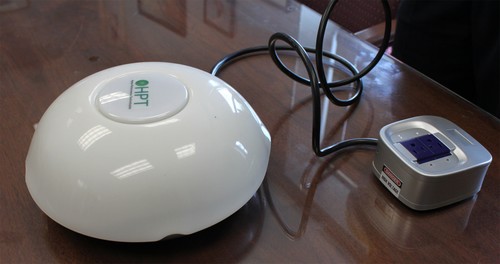 It’s called a “UFO” because of its disk shape and glowing lights, but for Sayville Senior John Farese, the device took him where he has never gone before—to the International Olympiad as one of eight New York State students chosen to compete in the Energy Division.

John’s close encounter with the UFO Power Center was the result of being in the right place at the right time, but his creative spin on the data it collected propelled him into an under-explored realm of energy conservation in ordinary homes. The UFO device, (which was designed by Marco Graziano of Visible Energy, Inc. and distributed by Home Performance Technologies, Inc.) measures the “phantom loads”—energy still being used even though the electronic equipment appeared “off”—from appliances that are plugged into its hub. The app for the UFO Power Center, which remotely measures and controls wattage consumption, can be downloaded to an iPad from the iTunes Application Store.

Under the guidance of Sayville’s Science Research Teacher Maria Brown, John has participated in the Sayville RISE (Research In Science and Engineering) program for the past four years. After his freshman year, he worked in the Minority Science Mentoring Program at BNL, and after his junior year, was accepted into the High School Research Program at BNL where he was assigned to the Sustainable Energy Group under the mentorship of Dr. Vatsal Bhatt.

While gaining knowledge about sustainable energy, John attended a presentation by a special guest speaker Mark Gunthner of Home Performance Technologies, Inc , who not only talked about innovative energy technologies related to current national energy problems but showed the students how the Ipad/iphone technology (STEM) worked with the UFO to measure phantom loads. Inspired by their “first contact” with this UFO, “John and a few other students designed an interactive ‘game,’” Mrs. Brown explained, “that could be used by all ages to learn more about energy efficiency and wasted energy from phantom loads.”

That is when John hit upon his research project to measure the “phantom loads” in his own home. “The purpose of this project,” John wrote in his abstract,” is to present a model for New Yorkers to reduce their energy consumption by evaluating phantom loads to develop individualized Energy Management Plans for the home owner and ultimately as a model for industry and commercial buildings.”

In his research on energy reduction, which has won him acclaim as a competitor in the Olympiad, John analyzed the electronics in a variety of rooms, calculated the “wasted” energy from the home, made projections for New York State and the nation as a whole, and designed a personal energy-conservation plan for his family so as to eliminate phantom load energy waste. (See the summary of John’s project and findings in the abstract below. Also, see the attached video…)

"This is a topic,” explained Mark Gunthner of HPT, Inc, “—energy reduction—that is tremendously important and tremendously popular with the highest levels: businesses, community leaders, and political leaders, right from the Obama Administration and down….all types of research having to do with energy efficiency and renewable energy is extremely important.  We new our students to learn about it early.”

At the Olympiad contest, offered through the I-SWEEEP (International Sustainable World Engineering, Energy & Environment Project, John will be presenting his innovative project. He will join the other, stellar, young researchers who have accepted today’s challenges in energy, engineering, and environment in hopes of making a better tomorrow. Airfare for both John and Maria Brown to attend the Olympiad competition was provided by Mark Gunthner's company Home Performance Technologies, Inc.

Energy consumption in the USA has tripled since 1949 and is distributed in  transportation (27.51%), residential (22.15%), industrial (33.14%), and commercial (18.21%).1 In 2011, New York was designated as the region with the highest residential electric rates in the contiguous USA.3 The purpose of this project is to present a model for New Yorkers to reduce their energy consumption by evaluating phantom loads to develop individualized Energy Management Plans for the home owner and ultimately as a model for industry and commercial buildings. The UFO Power Center application was downloaded to an iPad from the iTunes Application Store. Four room types in a house were evaluated for phantom loads to quantify wasted energy. The results for phantom loads per room type showed the following: mean of 3 bedrooms was 14.78W; basement was 34.39 W; den/living room was 19.94 W; and office was 10.18 W. This equates to the following costs per year for each room: (a) basement - $55.37; (b) office - $16.39; (c) bedrooms combined - $71.41; and (d) den/living room - $32.11. Rooms with the most cable boxes drew the highest level of phantom loads and cost the most to run year-round. The average household on Long Island wastes about 953.35 kilowatt-hours per year on electricity which equates to about $175.23 per household. In New York, there are 6,954,916 residential electric customers which equates to 6,630,474,733 kilowatt-hours and $1,218,681,256.00 each year.1 The national level is even more alarming; for 125,717,935 residential electric customers 119,853,293,900 kilowatt-hours and $14,166,659,340.00 are wasted every year.1 Further evaluations using this model should be conducted for commercial properties as cumulative effects are significant for energy conservation, savings, and education. 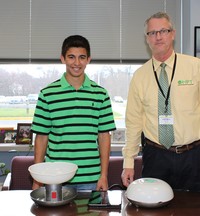